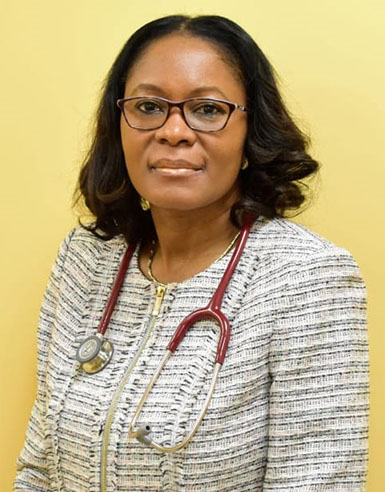 Dr. Taiye Apoeso is a board certified pediatrician with 20 years experience, working with children from birth until 21 years. Born and raised in Nigeria, Dr. Apoeso graduated from the University of Ilorin in 1992 after which she relocated to the US

She completed her Pediatric residency training at the Albert Einstein College of Medicine (Bronx Lebanon Hospital Program) following which she was the Chief Resident for one year before transitioning to become an Attending Physician in the same hospital until 2006 when she opened up COZ Pediatrics as an independent community provider.

While working with the hospital, she was an Assistant Professor at the Albert Einstein College of Medicine teaching Resident Doctors and Medical Students. Due to her love for teaching, even after transitioning to her Private Practice, she opened up her office as a location for continuity clinics and has supervised multiple Resident Doctors and Nurse Practitioner students.

Dr Apoeso has been Board Certified in Pediatrics since 2000 and has maintained her certification with the American Board of Pediatrics. She keeps up to date with her medical career by engaging in regular scholarly activities. She is also a Fellow of the American Academy of Pediatrics.

Dr Apoeso is actively involved in her community, ministering alongside her husband in a thriving Christian church. She has overseen several divisions of their ministry including the Children’s and Women’s Ministries. She is dedicated to the physical and spiritual well-being of children in particular and the family as a whole. Her passion to see children grow up in the knowledge of God caused her to pioneer the Grace Summer Club, an all-expense paid, one-week Bible-based summer program.

Dr Apoeso was the Keynote Speaker at the 9th Commencement Exercise of the Christ Life Bible institute and Seminary during which she was conferred the honorary degree of Doctor of Divinity.

Dr Apoeso has been married to her husband for over 25 years and they have two grown up sons.